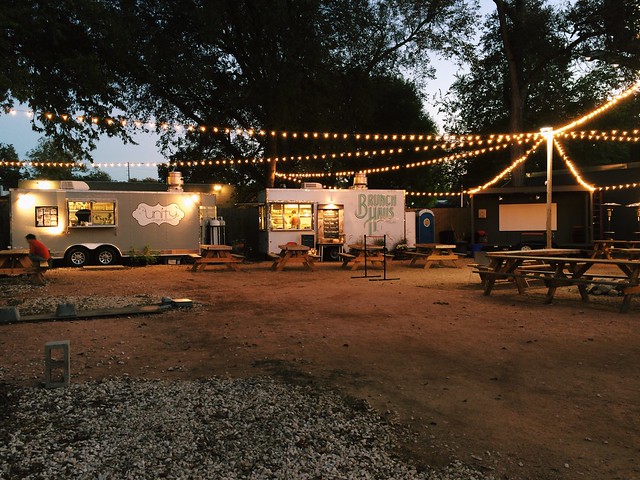 Of course one of the best things about being a member of the Austin Food Blogger Alliance is getting to hang out and eat food with fellow, local bloggers. Thankfully this happens monthly with the fantastic happy hours that Bo puts together.

Last night, we met up at South Austin Social, a new food truck park tucked away off of Barton Springs near South Lamar. Currently Beirut, Boca, Brunch Haus, Uncle Louie G’s, and Unity Vegan Kitchen are all situated there and treated us to a feast.

Here are some of the things I ate in the order that I tried them: 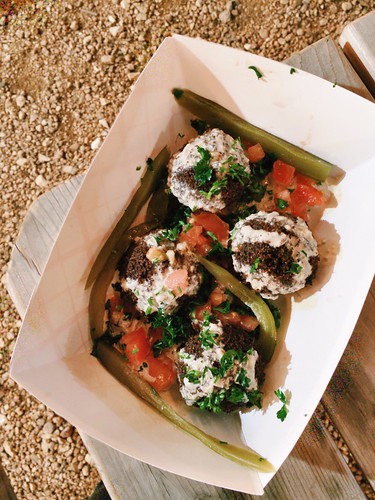 Anyone who has ever been to Austin knows that there is a serious mobile food situation in this town. I couldn’t tell you how many food trucks or even food truck parks there are around here. This led to the creation of the Gypsy Picnic Trailer Food Festival a couple years ago, which I attended. There was supposed to be one this year, but I heard that there weren’t any weekends available (crazy Austin!), which is why Trailer Food Tuesdays was born. The main organizer of both events is Tiffany Harelik, author of the Trailer Food Diaries Cookbook.

Since July, TFT has been taking place on the last Tuesday of each month, from 5-10pm at the Long Center. Tonight was both the last TFT of 2012 and my first time going. A handful of other bloggers were there as well: Julie, Suzanna, Rachelle, Natanya, and Katie! We didn’t actually know Katie beforehand, but noticed that she was taking an awful lot of photos of her food to not be a blogger. We (Julie) asked if she had a blog, and she said she did. Takes one to know one!

END_OF_DOCUMENT_TOKEN_TO_BE_REPLACED

This is the view from behind The Burrito Stand in Red Hook, NY.

I think most people associate music with Austin since it’s considered to be the live music capitol of the world.  It’s also quite the foodie scene with tons of local restaurants and cafes serving up pretty much every type of cuisine imaginable while appeasing meat-eaters to macrobiotics.  This environment has become a breeding ground for food trucks, which are absolutely booming right now.   To give you an idea of just how popular they are in Austin, here is a list of the food trucks here in San Antonio (population: ~1.3 million), and here is a list of those in Austin (population: ~800,000).

So far, I’ve hit up Hey Cupcake!, Torchy’s Tacos, Holy Cacao, La Boîte Cafe, Lulu B’s Vietnamese, and Gourdough’s (okay, so this was brought back to me).  Not bad for someone who doesn’t eat out much or live in Austin!

Anyway, yesterday the Gypsy Picnic Trailer Food Festival took place, and you bet I went!  30 of Austin’s most popular food trucks were chosen to be set up in a big circle around Auditorium Shores, plus there was live music going on (of course!).  This is the first time this has ever taken place, so the place was a ZOO.  I’m not sure that they had any idea just how many people would show up, but the lines were all super long, and I know some of the trailers were having a hard time keeping up with the demand.  Still, it was a really cool event!