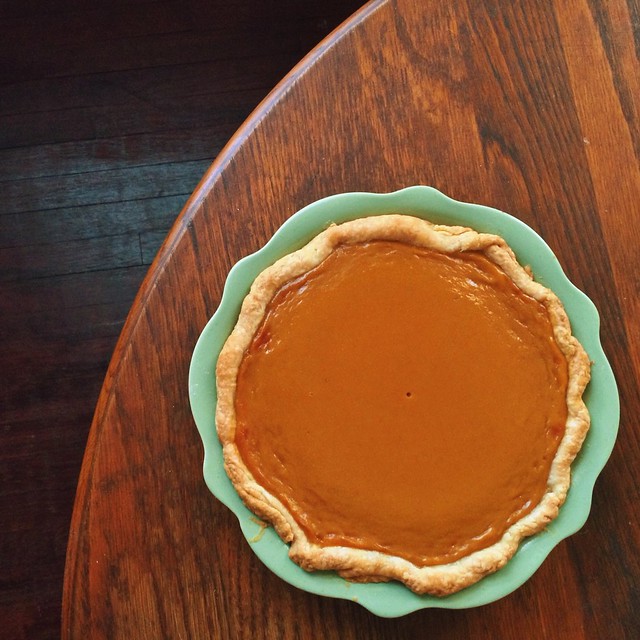 Usually for holidays, I bake a couple of desserts. I’m not sure if it’s more for variety or to avoid the whole eggs/basket situation, but it’s probably a little of both. This year, I just made one because there is always too much dessert (yes, possible), and it sounded like we’d have less people.

Oddly enough, I decided to make a classic pumpkin pie, which is odd because I don’t really care for it that much. I mean, I’ll eat it, but it would never be near my first pick in a pie line-up. So, why? The recently-posted pumpkin pie recipe on Smitten Kitchen. There’s something so reassuring about Deb that she makes you feel like she’s posting something that’s going to be better than all of the other recipes because she’s done the dirty work and already tried them all for you. But if you’re reading this food blog, then you know this because hers is one of the best and that is partly why.

Um, not that I intended to wax poetic about Deb when I haven’t even talked about this pie. But no surprises here: it was fantastic. I have some truly depressing pie experiences behind me, but this came out pretty perfectly, crust(!) and all. 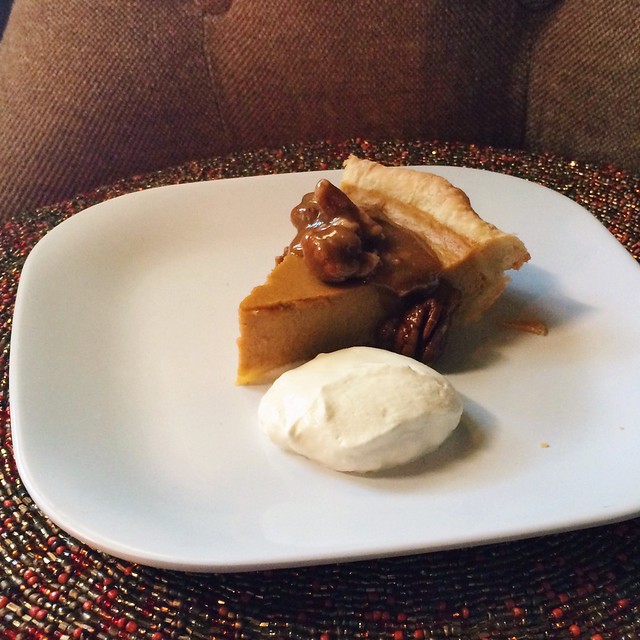 The light at my parents’ house is sad.

For me, one of pumpkin pie’s main drawbacks is the texture. I think what makes this one better is that she calls for heavy cream instead of evaporated milk. I mean, come on. Of course that’s going to taste better. Also, cooking down the pumpkin mixture removes some of the water, which also helps. While her recipe doesn’t require it, I’ve always wanted to make a pie with fresh pumpkin puree. Since butternut is a little more user-friendly, that’s what I used. Sure, it’s more work than opening a can, but it’s really not much more than that. Just roast, puree, and voila. So maybe that was also a reason why I found this pie to be better-tasting.

One little bonus was that she included a pecan praline sauce, an idea she got from Joy the Baker‘s new cookbook. Even though I’m not a big pecan fan either, of course I made it because my trust in these two ladies is strong. This was less successful because I basically cooked it too long, so as it cooled, it became more like pralines than sauce. Still tasty, though, and went so well with the pie that I wonder why it’s not usually made with it. I also made whipped up some cream because duh.

Yes, I am glad that I have a third of this pie left, and yes, I just had another slice. Maybe if you’re on the fence about pumpkin, you should give this one a go.

p.s. I am thankful that there are only three days left of N(aBloPoMo)ovember.