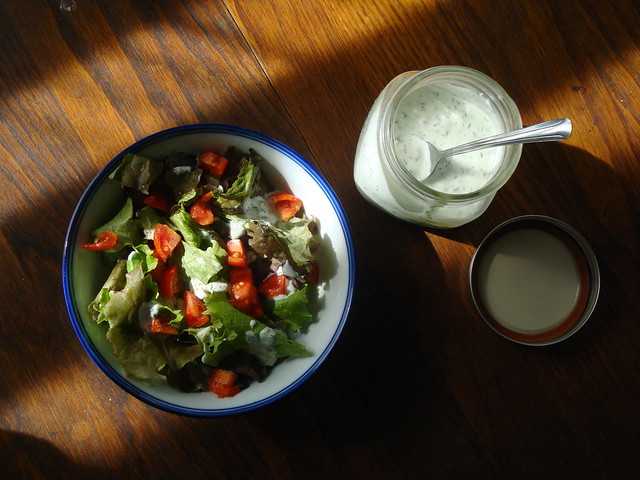 My landlady grew the tomatoes in our backyard, and the lettuce along with the dill and green onions (in the dressing) came from the farm.

Last week, I needed to buy some buttermilk for the pudding attempt. Usually I don’t need very much and just buy a pint of HEB (grocery store) buttermilk. That recipe called for a half cup more than that, though, so a decision had to be made. Do I buy two of them or something bigger? And then I looked at the larger sizes and spotted a half gallon of whole buttermilk. The HEB stuff is low fat. I drink whole milk. SOLD.

The nerd that I am was already really excited about the stuff, but then my love for it kept growing. It’s thick, as in thicker than whole milk. After baking that pudding, I still had quite a bit left. You know what it’s really good in? Mashed potatoes. It’s like adding both milk and sour cream because it makes them smooth, but also tangy. And if you add cheese, green onions, and bacon bits, welp, you will be very pleased with yourself.

So far, the greatest revelation has been salad dressing. I like salad, but never get very excited about it, so was a little bit unenthused about the two bags of lettuce that came in Wednesday’s volunteer veggie haul. But then I remembered this dressing that I made in the spring. It calls for buttermilk, mayonnaise, fresh dill, and green onions, and I had everything! And you know what? The last time I used the low fat buttermilk, so the only thing I wasn’t satisfied with was its thinness. Well, I’m happy to report that the fatty buttermilk makes some super thick dressing that is the best.

Yes, I want to marry buttermilk. 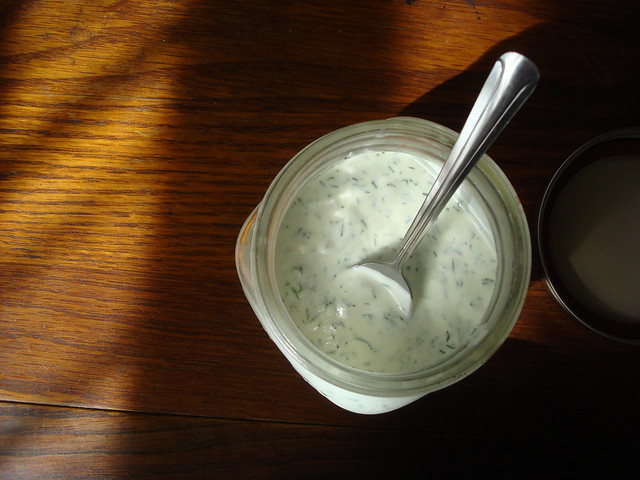 I rubbed the salt into the fresh herbs because it felt like the pretentious thing to do. Also, I didn’t add the garlic powder this time and it was just fine without it.

FYI, made it two days ago and am now down to one bag of lettuce.