Austin is home to a lot of people who like to nerd out about food, and one of the more recent obsessions has been ramen. There are three ramen-dedicated restaurants here, which seems like a lot for a city of this size in Texas. They all offer something slightly different, which I think helps keep each one busy. As of the other night, I have finally eaten at all three!

Veggie at Michi: scallions, sprouts, cabbage, wood ear mushrooms in shoyu shiitake broth with ajitama egg added. (I was vegetarian at the time)

Michi Ramen was the first ramen joint that I hit up, which was also my first real ramen experience. This was early 2013, so they had recently moved into the current brick-and-mortar from their original trailer. Michi offers three thicknesses of broth: light, regular, and stout.

Almost a year later, I ate at Daruma Ramen, which comes from the folks at Komé. What makes Daruma different is that their standard broth is made from chicken, not pork. Also, their vegetarian broth is fruit and veggie-based. Is it weird that I kind of want to go here sometime just for their crazy soft serve flavors? Nah. 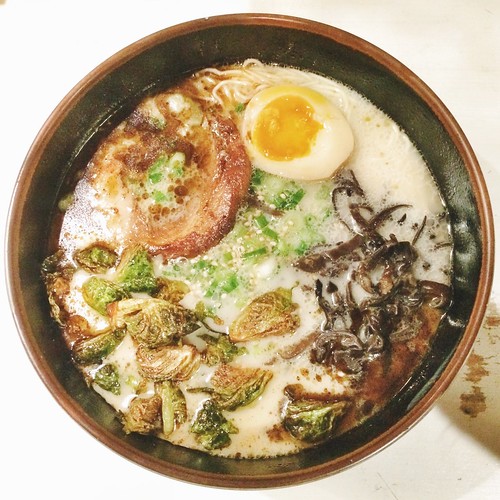 If the places on my bucket list were in order of how badly I’ve wanted to go to them, then Ramen Tatsu-ya would have definitely been in the top five. I crossed it off Thursday night! From what it sounds like, their ramen comes close to what one might get in Japan. I’ve never been to Japan, but I believe it. In addition to extra toppings, you can further customize your bowl with flavor bombs. Note: their veggie ramen is only available for Sunday dinner service.

And yes, all of these restaurants also have non-ramen offerings. Last year, Kristin of Mad Betty wrote up a thorough post about Austin ramen, which includes some of these.