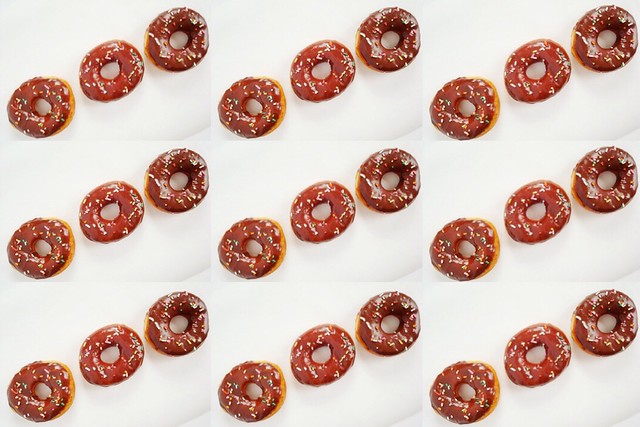 I am a plain, glazed donut kind of girl. You see chocolate-covered donuts with sprinkles. What I’m saying is that I made the donuts that I rarely go for because they are the EMOJI DONUT. Seriously.

Maybe I wrote the above on February 1st, which was my birthday. Because maybe I made these donuts for my birthday, but never actually posted about them. (Yep.)

As a lover of donuts who loves to bake, it seemed like the obvious birthday treat. I had only made baked donuts before, which, let’s be honest, are just donut-shaped cakes. Even real cake donuts are fried. Also, I had been wanting to try a potato donut, or spudnut, so figured I would make a batch of those since I hadn’t seen them in this part of the country.

This isn’t going to be a how-to post because I don’t even remember which recipe I used. Basically, donuts are kind of a pain in the ass, but that doesn’t usually bother me. The real problem is that they’re pretty much only good on the first day, and really not much longer after you fry them.

Don’t get me wrong, I’m glad that I can say that I have made real donuts of the yeasty, fried variety, but would I ever again? Unless there’s a donut party happening, then no. I will gladly go to a bakery to satisfy my donut cravings. And honestly, I think a donut party would be more fun if each person brought a couple different donuts. Can somebody throw one and invite me, please?

4 thoughts on “Do Not Donut”