So with the constant supply of vegetable earnings, I have been cooking a lot. Often this just means I sauté some veggies and top with an egg or toss with pasta. That gets boring pretty quickly, so then I look up recipes, especially when I have somewhat unfamiliar produce on hand.

Here are a few keepers that I loved. Yes, they’re summery, but maybe I’m just looking out for our friends in the other hemisphere.

Green Tomato Tarte Tatin from Out of the Ordinary

I found myself with several, small green tomatoes and a lack of desire to fry them. My friend, Jill, suggested making a tarte tatin, and this was the recipe I went with. Since there is butter, white wine, and thyme in the tomato mixture, I was pretty sure it would be a winner. Also, I added parmesan to the dough because I found that the recipe creator had done that in another version of this. GOOD IDEA. 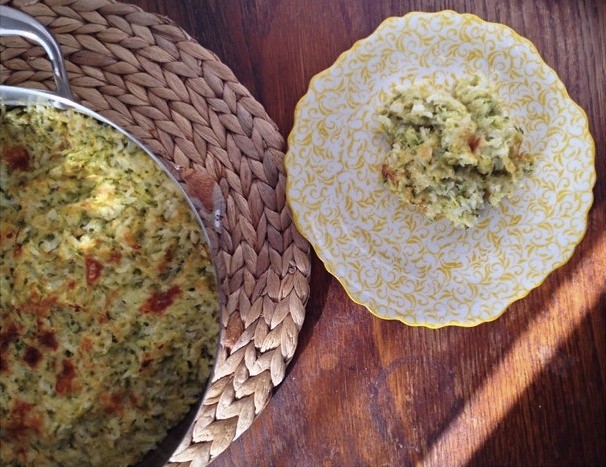 You know what? I adore this recipe. It takes some time, but it is so worth it that I’ve made it three times. The best thing about it is that it calls for 2 to 2 1/2 pounds of zucchini, which is pretty much the amount that I usually get from the farm. Actually the best part is when it’s ready and then having leftovers for days because you’re the only person eating this soul-warming, cheesy casserole. Souls need warming even in the summertime.

Knowing Ottolenghi as basically the Vegetable Whisperer with some eggplant tricks up his sleeve, I ran into this recipe and was sold. I mean, fresh corn polenta? It had never occurred to me that polenta could be anything but the stuff made from coarse cornmeal. And yes, it’s quite a different texture that is more along the lines of creamed corn. The amount of feta is a little heavy for my tastes, but overall, this was pretty dreamy. The eggplant almost melts in your mouth.