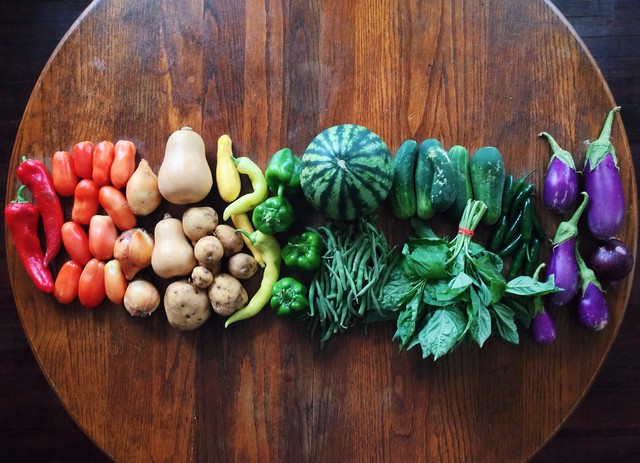 A little over six months ago, I began volunteering at Johnson’s Backyard Garden, an organic CSA-based farm in Austin. I found out about this opportunity shortly after moving here three years ago. If you know me, I don’t really seem like a farm-y person, which is partly why it took me so long to try it out. But you know what? I keep going back because it’s kind of addictive.

Why? Because being outside, working with veggies, and maybe getting a little dirty is fun. Really! And it also might have something to do with the bounty of beautiful vegetables that you receive at the end.

I think my biggest concern about doing this was wondering what the heck I would do with all of that produce. This is also what kept me from joining a CSA because I only cook for myself. You quickly learn to use up the things that go bad first, and if you have a fear of pickling like I did, well, you get over it. (Pickled peppers are the BEST.) 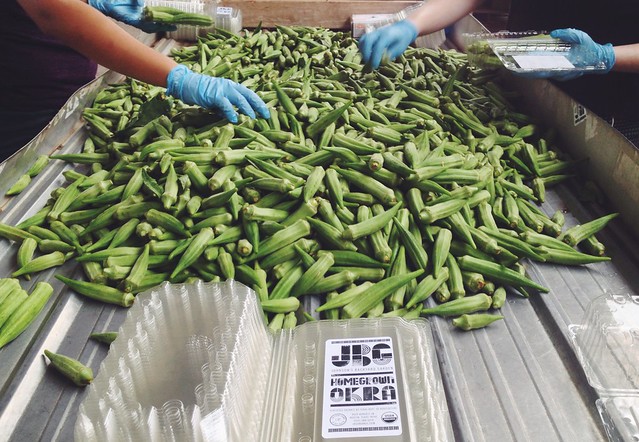 Gloves because okra is prickly.

So what does this entail? Well, you email JBG to sign up for a volunteer spot. The volunteer hours are 8am-1pm Tuesday through Friday and then also 1pm-6pm on Friday. Also, they have two locations: Hergotz Lane and River Road. So far I’ve only volunteered at Hergotz, which is where their packing shed is located. River Road is where they grow everything and the sun would toast me in a field.

At Hergotz, you pretty much sort and pack veggies the entire time. I’ve mostly done carrots, various greens, green beans, onions, okra, and peppers. They also used to grow things in a couple greenhouses, so I’ve planted some seeds, too. All in all, the work is easy, but can get a little tedious if you’re bagging green beans for five hours. Still, it’s always worth it. 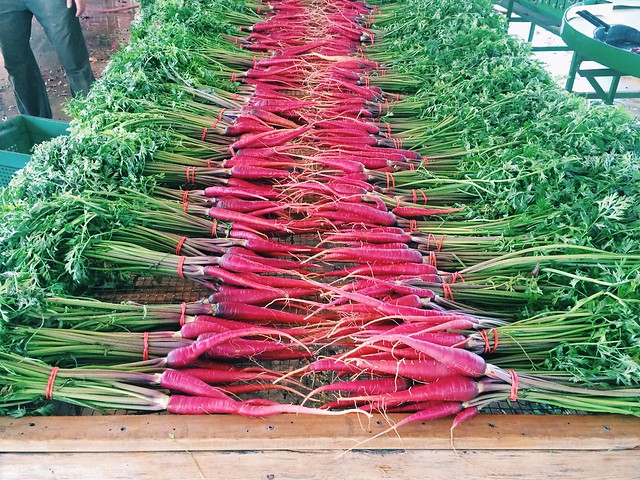 They send you home with a share of vegetables which is the contents of a CSA box, but they always have bins of extra veggies and encourage you to take as much as you can carry. I’ve always been amazed by the assortment and how it changes that I can’t help but lay it all out and take a picture. It also helps to have a visual of what I have just because it’s hard to remember what’s left in the produce drawer. I created an Instagram hashtag to see all of these photos in one place because nerd.

If you’ve been thinking about doing this or didn’t know about it and now want to, go for it! If you hate it, well, then at least you tried? It’s also good for if you’re thinking about joining a CSA but are worried about wasting veggies/money.

As for me, I can’t really imagine not volunteering for produce now. 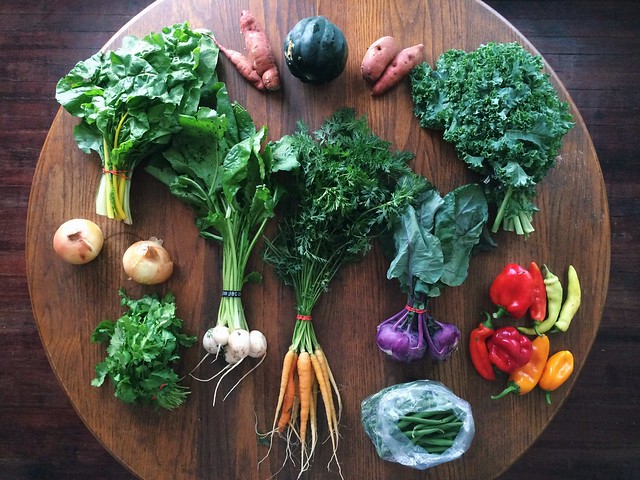 Pro tip: they don’t tell you this on the volunteer page, but bring a couple reusable grocery bags for your veggies because they want their boxes back.

8 thoughts on “Will Work for Veggies”